We don’t know ourselves! 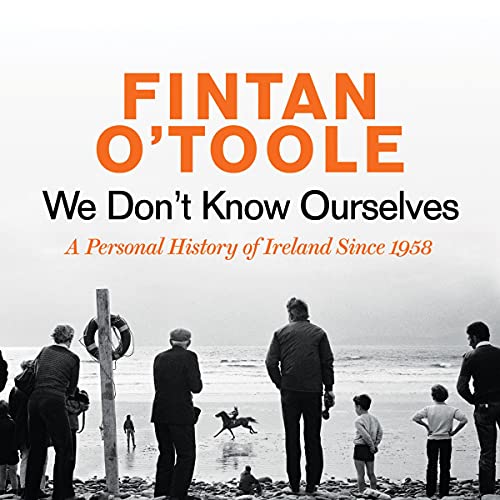 One of my Christmas presents in 2021 was Fintan O’Toole’s new book, “We don’t know ourselves, a personal history of Ireland since 1958”. Being quarantined in the house for a week, I confess I devoured the book quicker than the Christmas cake. O’Toole, born in 1958, is just a few months younger than I am. He is, as the foremost columnist at the Irish Times, one of Ireland’s leading cultural and political commentators.

He recounts tales of growing up in Crumlin, in south Dublin. He has the preacher’s knack of allowing a personal story to evolve into a commentary on a public story. He is almost Forest Gump like at times, turning up at the right time and place to comment on the dramatic events of Irish history. He is an altar boy to the famous conservative Archbishop of Dublin, John Charles McQuaid. His local sweetie shop is owned by Jim O’Keefe, the Mayor of Dublin, when President John F Kennedy visited the city. He is a neighbour of the famous drug barons, the Dunne family. He works for a summer in Dunnes stores, no relation, and meets both old and young Ben. There are 570 pages with chapters on among other subjects, the Congo intervention, the Late Late Show, the Christian Brothers, the Irish relationship with Britain and the USA, the changing music and literary scene, the Troubles, the Pope’s visit, attitudes to property, poverty and drugs, the Kerry Babies and moving statues, emigration, the ceasefires, the peace process, the Celtic Tiger and the abortion amendment. O’Toole describes dramatically the demise of the pillars of the state, the Roman Catholic Church, and the political party, Fianna Fail.

As I read the book, chapter by chapter, I felt I was being swept through my own life, being given prophetic insights into what was happening on this island. From my Limerick days, I can remember exactly where I was when I heard about Bishop Casey’s fall from grace, and when it became apparent that Mary Robinson would be President of Ireland.

O’Toole describes the remarkable Irish ability to, “know and not know,” particularly about clerical abuse, as well as political and financial scandals. At the same time he assesses the huge changes in the Irish economy influenced by civil servant, Ken Whitaker’s 1958 document entitled, “Economic Development”. He describes how the Irish economy grew with the new Irish Trinity of Information technology, pharmaceuticals and medical devices. In the 25 years from 1990, US companies invested roughly $277 billion in Ireland, more than Russia, China, and India combined.

O’Toole moves from being an altar boy to studying scholastic philosophy at UCD, under Desmond Connell, who would become a Cardinal and Archbishop of Dublin. While he later rejects institutional religion, the influence of those years can be discerned in his adherence to a morality of the common good, and his use of religious language. He uses the language of idolatry to describe how, “Since the 1960s Fianna Fail had linked itself financially and morally to the property developers who epitomised their native resurgence, it could not believe that these gods were failing. It chose instead with dreadful consequences for the Irish public to believe that they were merely experiencing some temporary troubles. What the gods needed were more sacrifices.”

His final chapter is optimistic. Let me quote, “What was being recognised was not just the wonderful and ordinary variousness of Irish lives and desires, it was Irish society’s other secret self – not the one that contained all the darkness and in-turned violence, but the great secret of intimate grace. Ours has been a place in which the quiet kindness of human acceptance of loving and liking people even when their lives were not as they were supposed to be.”

After reading “We don’t know ourselves”, I felt I knew my southern neighbours better, but I couldn’t help wondering, do we still not know ourselves here in
Northern Ireland and do we northerners need to rediscover more in public as well as private lives of “the great secret of intimate grace”?

Tony Davidson was the minister in Christ Church Limerick and Shannon from 1986 to 1994 and since then has been the Minister of First Armagh Presbyterian Church. He is a former chair of ECONI, and President of the Irish Council of Churches. He chairs the Peace and Reconciliation Panel under the Council for Public Affairs of the Presbyterian Church. He is married to Christine and has three grown up children and four grandchildren.