Praying beyond ourselves and our shores 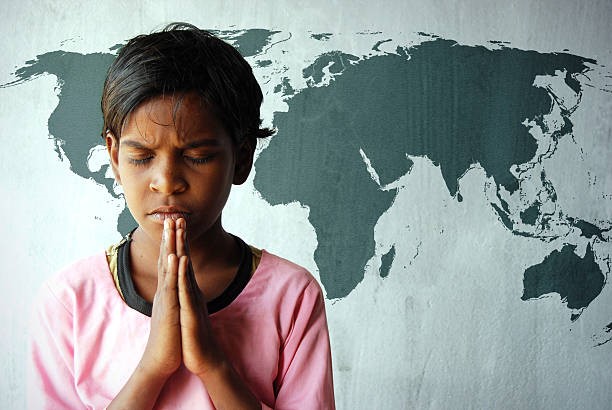 After retiring in 2017 from ministry in Presbyterian churches in the Republic, we moved north and engaged in a bit of “church tasting”.  Although there was a friendly welcome everywhere and faithful biblical preaching, I was dissatisfied with the prayers for others, which tended to be brief and focused on the needs of the congregation – the sick and the sorrowing.  The nearest we got to looking further outwards was to pray for mission teams.  At that time there was an Assembly election campaign but you would not have known that from the Sunday prayers.

The downgrading (and sometimes removal) of prayers for others was something I had noticed when worshipping on holiday especially with new fellowships but it was sobering to realise when attending various Presbyterian churches how far this trend was embedded in my own denomination.  John Witvliet’s article in Christianity Today December 2021 “If a Social Issue Matters to God, the Church Should Be Praying About It”** makes it clear that this also affects reformed as well as other churches in America.  He writes …. “Painfully, in the worship of far too many churches, there is barely even a mention of the world’s horrors. Instead of lamenting, confessing, and interceding with specificity and honesty, these churches tend to avoid, deny, or minimize the public trauma that is all around them. The understandable desire for a respite from trauma ends up perpetuating a pattern of disengagement from society.”

There are many interrelated reasons for this liturgical silence. First, some churches operate with a thin, individualistic view of the gospel, focusing nearly all their liturgical attention on individual conversion and comfort. Second, some churches are conflict avoidant and eager to stay away from public controversy during worship. A third, perhaps underappreciated, reason is a pronounced decline in public intercessory prayer.

In many worship contexts today, intercessory prayer has fallen on hard times. It is stunning how often my students report that while their churches have robust practices of congregational singing and preaching, they include almost no prayer at all in public worship. They say their churches will pray about the physical health needs of members but never mention any larger societal concerns.

Permit me a bit of trumpet blowing about my own practice in ministry.  I found often that there was more feedback to the prayers for others than to the sermon!  I learned that it was important and fruitful to spend time praying about what I should lead people in prayer for others.  I often would select an item in the news and seek to pray into that or take a sensitive topic and seek to pray scripturally and I trust compassionately.  Once I sensed I should pray for people struggling with bitterness and was warmly thanked afterwards by one person for how helpful that had been to him that day.  At weddings, as well as praying for the couple I would mention also those whose marriages had ended through death or divorce and for those who had no prospect of the blessing of marriage.  At one reception, a divorced person whose situation I did not know said that that was the first time she had been prayed for in church.  A single person quietly thanked me for a more sustained prayer about the challenges of singleness.  Once we had an episode of vandalism in the church car park and I prayed specifically for the person or persons doing the damage that God would speak into whatever personal bitterness or darkness was driving them and somebody commented afterwards that that had helped him to have a more compassionate attitude to the situation.   (We also prayed for those who had suffered damage!)

Let me challenge and encourage those who lead worship to give attention to praying for others, especially where there is no liturgical format such as in Church of Ireland practice.  It is good to have a checklist: personal needs, church life, the local community, politics and government, international mission and world concerns.  A newspaper can be a good guide to “what’s hot”.  Witvliet’s article gives some creative suggestions.  If the reformed practice is followed of having intercessions after the sermon as part of the response to what has been shared, then issues raised in the sermon can be followed through.

To be clear, it is good and right to pray for personal needs of those close to us and for mission teams, but more is needed.  The story of the Good Samaritan reminds us that loving our neighbor involves loving beyond our own tribe and prayer is one, perhaps neglected, means of loving.  We need to find ways of praying for those we find hard to love.

John Faris is married to Heather and they have two adult children. He has served as a Presbyterian minister in North Belfast, Co Fermanagh and then in Co Cork until 2017.  Although still a supporter of Munster rugby, he retired to become an Ulster Scot once again. He retains involvement in the Presbytery of Dublin & Munster, and compiles the fortnightly Presbyterian Notes in the Irish Times.