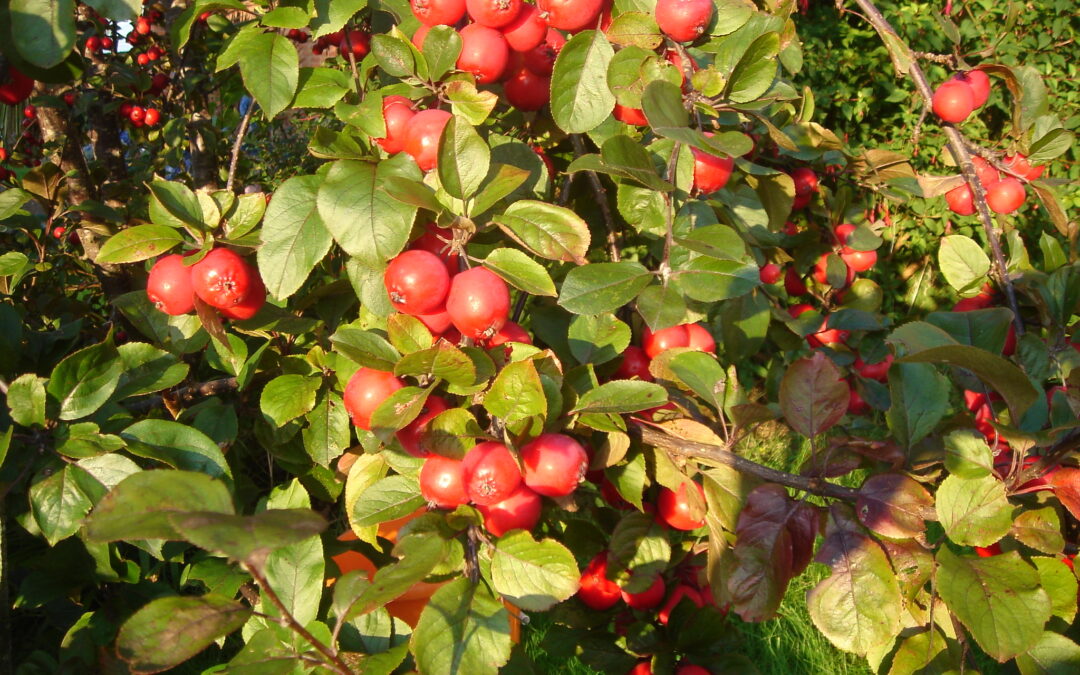 “…The Lord God had planted a garden in the east, in Eden; and there He put the man He had formed” (Genesis 2:8)

It is going to be a good harvest of crab apples this year. I know because there was a lot of blossom on the tree in the spring. Now, as I sit writing this, countless deep red marbles are weighing down the branches so that they are not fluttering in the breeze, unlike the purely leafy twigs. The tree has settled into a pattern of alternate years of abundant fruiting. It seems just to have the capacity to flourish every other year, but I am thrilled when it does.

The abundance God has provided, in this world and of Himself, enables us to flourish, yet…

It is easy, for me for one, to fall prey to eco-anxiety, or eco-grief, about what we are doing to this planet, our home, and to despair about how we humans create the means for and resort to conflict with each other. Jesus came to inaugurate the Kingdom of God as Matthew and Luke, in particular, pointed out in their Gospels. However, what does this look like here and now?

It is clear, from the very beginning, that God is a relational being.  He walked in the garden in the cool of the day to enjoy the company of the humans He had created (Genesis 3:8-9). This is also clear from the speech Paul gave at the Areopagus in Athens on one occasion, recorded by Luke in Acts 17:22-31. Having introduced God as the Creator and Sustainer of all life, Paul talked about God wanting a relationship with us, saying that in providing for us: “God did this so that men would seek for Him and find Him…” (Acts 17:27).

We rightly focus on all that Jesus has done to bring us into conscious relationship with God, dealing with the problem in the relationship – our need for repentance – as was pointed out by Paul at the Areopagus. However, we also need to remember, and understand, and appreciate, all that Paul said on this occasion, which is in line with the whole of Scripture.

From the beginning of the Bible, various passages help us to consider in more detail how God’s omnipresence and His sustaining power are the milieu in which we can flourish.

Genesis Chapter 1 gives the big picture of God’s creative work. Chapter 2 zooms in to give us a more detailed picture. Having put the man in the Garden of Eden, we learn about;

The man was intimately connected with the natural world around him. God ‘brought’ all living creatures to him and he had the privilege of naming them – he knew them. This was a flourishing world, and human flourishing within it was enabled by what God had provided.

Not only did God provide a physical environment in which humans could flourish along with the rest of creation, His generosity of Himself is also evident in His presence to and with us as “…the compassionate and gracious God abounding in love and faithfulness…” (Exodus 34:6). God Himself is the environment of grace in which we live. When Paul was putting his case to the Athenians, he said that God “is not far from each one of us.” “For in Him we live and move and have our being.” (Acts 17:27-28). God is near to every person, whether they are in relationship with Him or not, and indeed the very breaths we take are given by Him. Our physical being is His doing, even though we are not aware of Him in this way. In other words, as we live each day, eating, sleeping, working, exercising, relaxing, enjoying each other, etc. we are living, moving and having our being in Him.

This view of God being involved with all human beings popped up recently in a lovely book about hospitality, ‘A place at the table’, co-authored by Jo Swinney with her mother, Miranda Harris, sadly no longer with us. Drawn from notes where she discussed welcoming people into our homes and our lives, Miranda says,

“I became aware of a secret history unfolding in every life in which God, acknowledged or not, is the protagonist.“

As well as belonging to the community redeemed in Christ, she says “we belong more fundamentally, along with every other man, woman and child, to the community of the created“, going on to quote from Paul’s speech at the Areopagus that, “we are all God’s offspring” (Acts 17:29).

Back to Paul – reading through 2 Corinthians recently I was struck by how often Paul mentions grace – 11 times in 13 chapters. In chapter 9:8 Paul says: “And God is able to make all grace abound to you, so that in all things and at all times, having all that you need, you will abound in every good work.” Grace abounds to us, grace is abundant! The spiritual ‘atmosphere’ in which we live is grace. One result is that we flourish. Another is that grace flows on from us to everything around us, like the river flowing out of Eden, sub-dividing and giving life to distant lands. We play a part in the flourishing of others and of the world around.

Is this idealistic – yes! Is it worth contemplating as our purpose in being – Yes!

On a number of occasions Jesus got embroiled in a discussion with the Pharisees about the Sabbath. Remarking on the account of these in on Luke 6:1-11, the Scripture Union commentator says that Jesus “…was reminding His listeners of the foundational purpose of the Sabbath: to promote human flourishing.”  He, Jesus, was redefining Sabbath “…linking it to doing good…“, and aligning it with “…the overarching goal of helping people flourish…“. Therefore, when Jesus healed people, when He fed and taught them, this was Him, as God, giving them their ‘being’, and helping them to flourish. When we do this in our ‘secular’ jobs, for example, we are assisting God in His work of helping humanity flourish.

We sometimes say that we are God’s hands and feet in our world. Based on how I have been reading these Scripture passages, we should have a higher view of what our lives are about. God’s purpose is not just that we should know Him but that our existence is about flourishing and helping creation and all of humanity flourish in this amazing world He has created.

Ethel White was involved in crop research, working with the agri-food industry, and is now a creation care advocate.